Baseball is America’s favorite sport. Heading to the ball diamond is as integral to American culture as apple pie or root beer floats. It is a very accessible sport with low costs to form teams and play, widespread availability to all ages and demographics, and a loyal fan base.

The magic of baseball comes from its versatility. The game does not rely heavily on one skill set over another, so any player with athletic ability and determination can play successfully. You just need to learn the basic rules of baseball to get started.

# 1 – Invest in the Right Equipment

In baseball, especially at higher levels, pitches are hurled up to 90 mph. Batters swing with all of their strength, trying to hit the balls out of the park. Every at-bat brings the possibility of a home run that sails safely out of the park or a line drive that knocks a player to the ground.

Playing with the correct baseball gear will help protect players from needless injuries. Players in the field wear a single leather ball glove on the catching hand to provide a firm surface that cushions the hand from the ball’s impact.

Plus, catchers positioned behind the plate wear full-body protection, including pads and a helmet to protect them from rogue foul balls, swinging bats, and poor pitches.

Players at-bat use a wood or metal bat and wear a helmet for protection against bad pitches. Some players also optionally choose to wear a batting glove to improve their grip on the bat. All players wear baseball cleats, special shoes designed to provide traction on a ball diamond.

The game uses a single ball that is characteristically white with red stitching. The ball has an inner core of rubber-coated cork insulated with wound yarn, and the outer shell is cowhide leather. 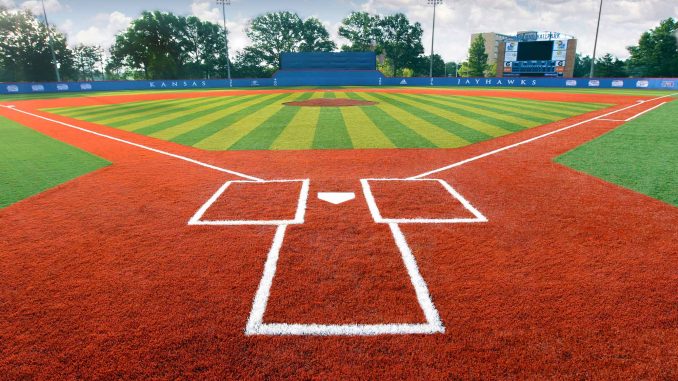 Baseball players use a diamond-shaped field that typically consists of a dirt infield and a grass outfield. In the baseball world, the field is simply called the diamond. The infield faces a home plate; where the action happens.

There are three bases placed at the points of the diamond. Batters will run the bases in order of first, second, third, and home with each hit. In the center, facing the home plate, is the pitcher’s mound. This is where the pitcher will stand to throw pitches to batters.

The infield has lines that mark out the batter’s box, catcher’s box, and foul lines extending from home plate to first and third bases.

When playing defense, defensive players are at each base and at least three in outfield positions, plus a catcher and catcher. One additional infield position called a shortstop is optional. The offensive team will have a rotating at-bat player and a varying number of runners on bases.

A scoreboard is often located in the right-center outfield on the fence or just behind the fence to not interfere with gameplay. One umpire stands behind the home plate, and additional umpires stand off the foul lines to help make calls.

A strike is a call in baseball that signals a missed hit. Batters get three strikes per at-bat. A batter can get a strike for either swinging at and failing to hit a pitch or for failing to swing at a good pitch.

A good pitch is one that is within the predefined strike zone. The strike zone is the area over the home plate that falls in between the batter’s armpits and knees.

A skilled batter should be able to hit anything that falls into this range. Pitches that go too far to the inside or outside of the plate are balls. And, pitches that go too high or too low for a batter are also balls and do not count against them.

A batter earns a strike if they swing and miss any pitch, including those not within the strike zone. The judgment of whether or not to swing at a poor pitch falls to the batter and is part of gameplay skills.

Baseball games last for a total of nine innings. Fewer innings may be played in younger leagues or if the game is determined to be a shut-out (excessive imbalance of scoring between teams).

There can only be one runner on each base at a time, so the runners on base are forced to progress with each hit. The element of excitement comes from watching the defense work to stop runners from making it around the bases to score.

Batters are protected from bad pitching by walks. If a single batter receives four balls (bad pitches) before they strike out or make a fair hit, he or she will automatically take first base, and the at-bat will be over. Also, batters who are struck with a bad pitch will take first automatically.

In baseball, teams score when runners cross home plate without being tagged out. Runs are scored successively through all nine innings, with the team who scores the most runs being named the winner.

A home run or grand slam is particularly desirable to the offense in baseball because it guarantees a score – leaving the defense powerless to stop it.

In a baseball game, the ultimate offensive goal is to load the bases and then hit a home run to score four runs simultaneously.

The defensive team can prevent the other team from scoring by catching a fly or foul balls to out a batter, meeting a runner at a base with the game ball in hand and tagging the runner out, or striking the batter out.

The defense’s goal in baseball is to close the inning without allowing the other team to score runs. The main way this happens is by striking out batters.

The offensive team’s goal is to score as many runs as possible before the inning turns over. Coaches often stack batters by their strength to give their team the best chances of scoring runs.

This means that batters who tend to hit singles will bat before harder hitters with a talent for hitting it out of the park.