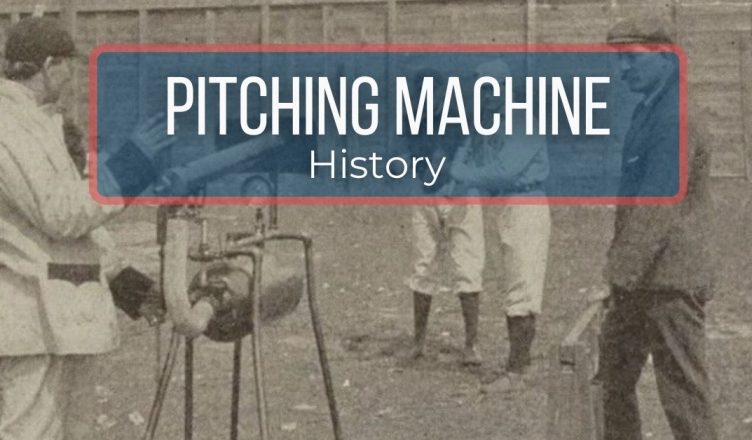 If you’ve played baseball at any level or ever taken batting practice in a cage, you’re likely familiar with pitching machines.

Organizations from little league all the way through the majors use pitching machines to throw controlled BP and run drills. By using these machines, teams are able to protect their live pitchers by reducing arm strain.

Though the inception of the pitching machine occurred over a century ago, the device wasn’t much of a success. Over the years, engineers and baseball enthusiasts alike have tweaked the design to improve its efficiency.

Below, we’ll recount where the pitching machine began and illustrate its evolution.

Check out our review of the pitching machines that are great for little league practice.

Who Invented the Pitching Machine?

While his intent was admirable, the first incarnation of his pitching machine failed. It utilized gunpowder, which was unpredictable and often inaccurate. Use of the machine discontinued as injuries piled up. 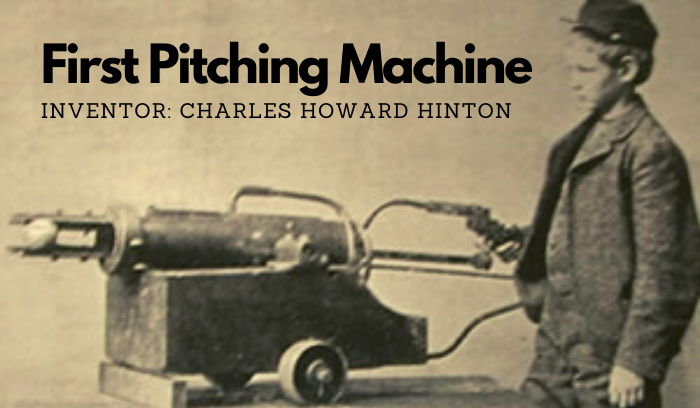 Hinton’s pitching machine paved the way for others to try and make their own adaptations.

After his initial failure, Hinton left the university. He took the machine to the University of Minnesota where it received praise.

With new technological advances, pitching machines became safer and more reliable. Their popularity grew across the country. Teams of all ages began using pitching machines on the practice diamond. They could both hone batting skills and protect their pitchers.

A spinning wheel design revolutionized how pitching machines work on the diamond. They could throw different types of pitches, including curveballs, sliders, and more. The most basic of these machines was the one-wheel machine created in 1916 by Bartley N. Marty. 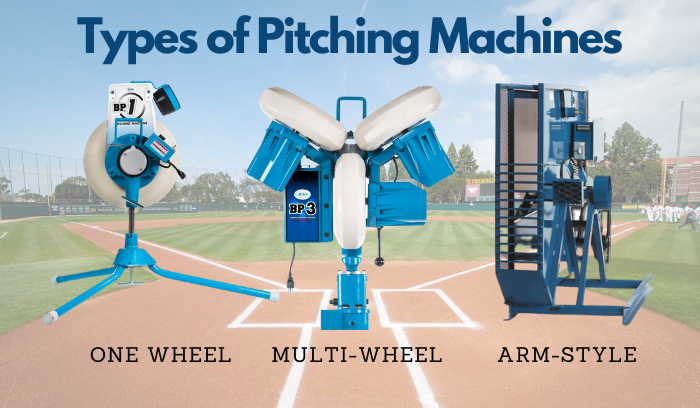 The One Wheel Pitching Machine

A one-wheel machine is the most basic of the wheel design machines.

The ball feeds through a chute that passes a spinning wheel. The wheel transfers its energy to the ball as it launches from the machine.

This basic machine style is capable of throwing fastballs. Some newer models can achieve a curveball. But, the range of pitches is most limited on the one-wheel machine.

Recognizing a need for a wider variety of pitches, engineers began to build on the wheel design. Two and three-wheel machines feature wheels spinning at different rates. As the ball passes through the wheels, the machine can produce different speeds and spins.

In 1952, Paul Givagnoli designed the arm-style pitching machine. The arm-style mimics a real pitcher’s arm-throwing action. Different designs use a variety of mechanisms to launch the ball toward the plate. Compressed air, wheels, and arm propelled machines are all popular for different reasons.

Today, Master Pitch is an industry-leader in pitching and batting cage equipment.

The arm-style pitching machine is often preferred by players. Many players rely on the arm-throwing action to help with timing the swing. These players often struggle with more mechanical pitching machines.

By 1960 there were several different styles of reliable pitching machines. These machines were becoming common at higher levels. This included the arm-style machines and one and two-wheel machines.

But it was the summer of 1960 when then-little league coach, Norm Bruce, built a simple machine. A poly-launcher that would become the foundation to launch Granada Machines.

That summer, Norm Bruce wanted to help his young hitters who were not progressing. He invented a simple machine to throw plastic balls for batting practice. The results were indisputable: improved batting averages for his little league team.

Removing the fear of a ball hitting them in the face helped young batters feel more confident at the plate. Without fear, they were able to focus on learning the correct stance and swing. Good posture paired with repetitive practice produced measurable results.

By 1965, Norm Bruce was ready to take his revolutionary poly-ball launcher to the next level. Bruce took his machine to the American Baseball Coaches Association show. In one demonstration, he sold eighteen machines.

By the late 1900s, pitching machines had reached all levels of baseball. Players from the little leagues all the way up to the pros were using them.

Some coaches prefer the accuracy of the pitching machines.  Some prefer the on-demand variety of pitches. And some favor the repetition of having batters swing at fast pitches. , there are a wide variety of machines available for all purposes.

The 2000s brought us widespread digital technology. The same technology that has changed our day-to-day lives is also changing the face of sports.

Like their predecessors, modern machines feature arm-like motions or wheel-based systems. Yet, digital technology has increased the efficiency of use. Variable drills can be pre-programmed into the machine to mimic real pitches.

The ability to switch between set pitching styles and pre-programmed drills is invaluable. One team can make use of a single machine for all purposes which makes the expense more affordable.

But technology offers us more than streamlined efficiency. Technology allows us to boost the entertainment value of traditional pitching machines. Through the use of simulations, batters can enjoy a unique experience. Some batting cages come equipped with simulation screens.

The pitching machine launches the ball from an opening placed to match the display, giving off the illusion of facing a real-life pitcher.

Imagine stepping into the box to face a simulation of Clayton Kershaw or Gerrit Cole?

The Takeaway on the Evolution of Pitching Machines

Players as young as 7 or 8 years old are using poly-launchers to learn timing and plate discipline. A good machine for pitching can deliver a wide array of accurate and on-demand pitches. It can be helpful for repetitive practice and coaching drills.