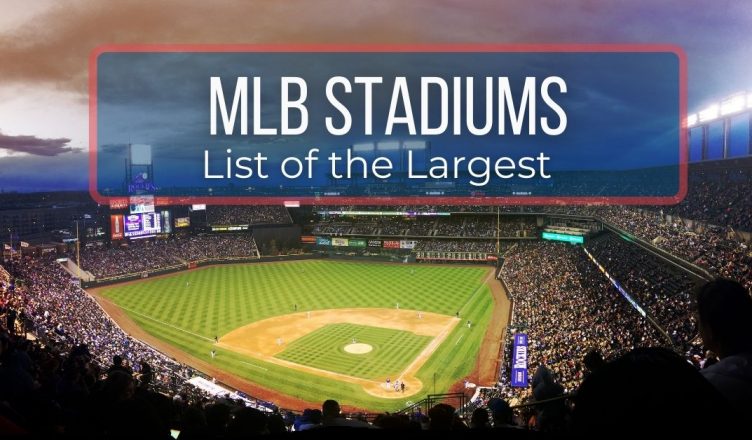 Take me out to the ball game!

Nothing beats a day spent in one of America’s classic baseball stadiums. With 30 MLB stadiums located across the country, you’ll find no shortage of great places to watch the pros play.

Here’s a closer look at baseball’s biggest stadiums. Each one is a guaranteed good time sure to create awesome memories for fans of all ages! 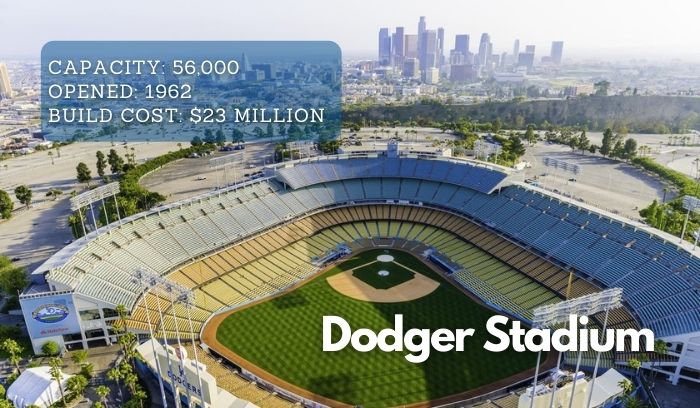 Dodger Stadium is the largest stadium in Major League Baseball. Located in downtown Los Angeles, it holds up to 56,000 fans. Not only is it the biggest, but it’s also packed with history, as it’s the third-oldest stadium in the US, behind only Fenway and Wrigley.

While it’s a well-loved icon in the world of baseball, the stadium initially drew criticism from residents. The developers wanted to make the stadium large enough to fit 85,000 people, which pushed its footprint into the neighboring community. However, the scope was pulled back to accommodate the community better.

At first, the stadium held about 54,500 people, but some reconstruction added the final 1,500 seats. In the mid-2000s, they replaced all of the seats and added more room in the dugout. Today, seating follows a specific color scheme designed by Walter O’Malley, who brought the Dodgers to Los Angeles.

The top seats are all blue, which represents the ocean and sky surrounding Los Angeles. Next, the seafoam green seats stand for the landscape around the stadium. Seats in the Loge level are light orange, and they represent the sandy beaches in the area. The Field level seats are yellow, symbolizing L.A.’s sunny skies.

Dodger Stadium now has its own zip code, and the owners continue to add more to the stadium. The clubhouse now has batting cages and a weight room that teams can use to prepare for a game. Fans can watch players warm up with seats and an overlook over the bullpens.

Open to the People

People can visit Dodger Stadium even when games aren’t on the schedule. The stadium offers an excellent view, so some locals will stop in to eat lunch or simply hang out. However, you can also enjoy a game in the largest baseball stadium in the United States.

If you have a convention or corporate meeting, you can rent Dodger Stadium for the event. The venue has a variety of meeting and event rooms that fit anywhere from 50 to 600 people. Renting a room for your event is possible throughout the year, so you can enjoy the ballpark during all seasons. 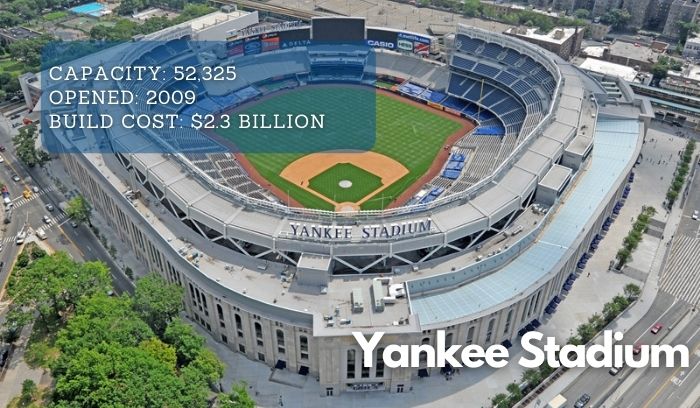 Next up at bat, we have the legendary Yankee Stadium, which fits up to 52,325 people (sitting) or 50,287 (standing). Today’s Yankee Stadium isn’t the original. Instead, it’s a bit smaller than the earlier iteration, which could fit over 56,000 people.

Tickets are Pricey (But Every Seat’s a Homerun!)

Tickets to Yankee Stadium are some of the most expensive. The average cost for a game ticket is $510, but the most expensive ticket was $2,600. However, the high prices of some tickets make them hard to sell, and it’s not uncommon to have an empty section behind home plate.

Although the current stadium is smaller, it’s hardly small. Each seat offers plenty of legroom, so fans often find they get their money’s worth. You won’t feel squished in your seat, unlike the experience at some other stadiums.

Awesome Selection of Food and Drink

While at the stadium, you can take advantage of over 100 concessions stands. About 112 stands are moveable, and there are 25 fixed stands throughout the park. That variety means you can find almost anything to eat before or during a game at Yankee Stadium.

The stadium hosts a variety of events outside of baseball, including other sporting events, concerts, and graduation ceremonies. Plus, the 59-foot scoreboard is visible from every seat.

Yankee Stadium is right off of Interstate 87, and it’s right across the water from Upper Manhattan. That makes it easy to get to from much of New York City, so you can visit the stadium for a game or another event. It’s also right next to Yankee Stadium Station, which is great if you want to take the subway.

Other Ways to Participate

If you can’t make it to a Yankee game, you can visit the ballpark and enjoy some other activities. You can take a tour of Yankee Stadium to learn more about the local baseball team. Options include virtual tours and classic tours where you visit in person.

The venue also offers birthday parties, so you can get a private tour. All of your guests can take home gift bags and Yankees ball caps. 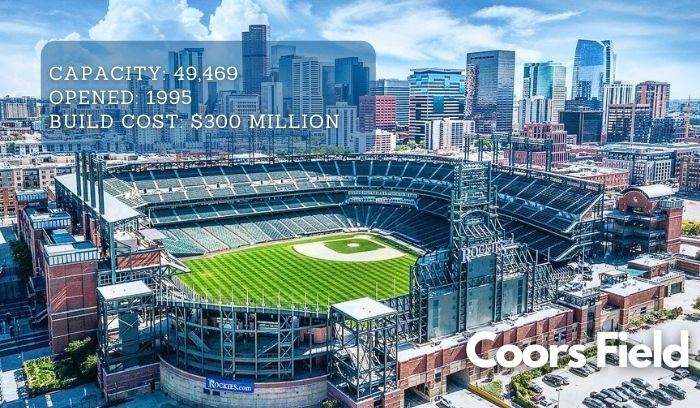 Denver, Colorado, is home to the next largest baseball stadium, Coors Field. The original design gave the field a capacity of 43,800, but the influx of interest in baseball made the builders change it to fit 49,469 people. While Denver is known as the Mile High City, the field marks that height specifically.

The upper deck’s 20th row sits exactly one mile above sea level. You know you’re in the right spot because the seats are purple instead of the blue color found everywhere else.

Don’t worry if you want to attend a winter game. The stadium has 45 miles of cable underneath it to help melt snow, keeping fans comfortable even during a snowstorm. It’s the first baseball stadium with a heated infield, and the cables are useful year-round. During the dry summers, the cables help keep the grass green.

Coors Field offers various accommodations to meet the needs of all ball fans. You can take advantage of accessible parking and seating, but you can also hear the game via captioning and assistive listening devices.

Getting around is easy thanks to a host of elevators, escalators, and ramps. Plus, service animals are welcome. All guests can get help from guest services and first aid centers.

Coors Field holds the record for most home runs in a season, at 303. Denver’s dry air and high elevation make it easier to hit balls. To help level the playing field, all game balls are kept in a humidor room to help keep them from getting too dry.

Coors Field is in the heart of Denver, right off Interstate 25, so residents from all over the metro area can get to the stadium. The nearest exit leads right to and from the stadium, so you don’t have to navigate through downtown.

At every Rockies game, you’ll find Dinger the Dinosaur having fun on the field and in the stands. During stadium construction, a 66-million-year-old dinosaur skull was discovered during excavation, inspiring the team’s one-of-a-kind mascot. 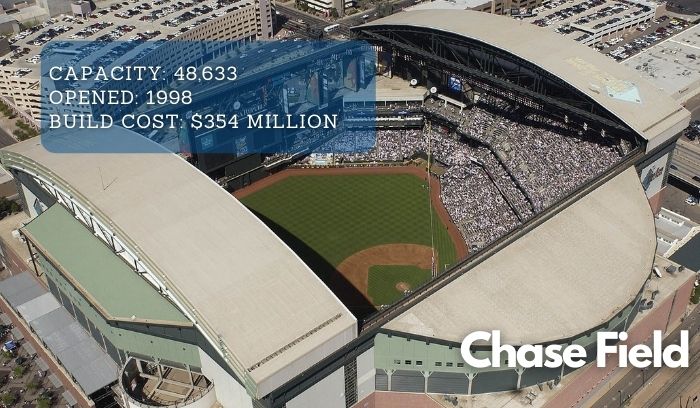 Chase Field is the next largest ballpark, and it’s in Phoenix, Arizona. The stadium got its start in 1998 as Bank One Ballpark, and it has gone through many renovations since. Originally, the stadium’s capacity was 48,500 seats but recently increased to the current total of 48,633.

A Big Screen for Big Games

In 2008, a 136-foot by 46-foot LED video board was installed, which is eight times the size of the previous screen.

The screen can play one or two videos at the same time, which can help spectators keep up with the game. It offers fantastic visuals, and the stadium also has lineup boards for the home and visiting teams.

Phoenix has notoriously high temps during most of the year, so Chase FIeld features a retractable roof to help keep fans cool. The roof is typically kept open until a few hours before game time, and it’ll also stay open during many night games.

Opening and closing the roof is quite an event, too! A fun, original song plays as the roof moves, and typically the stadium erupts in cheers.

Chase Field also features a pool where a few lucky fans can hang out during the game. Located less than 500 feet from home plate, it’s open to fans even when a game isn’t going on. You’ll stay safe, too, because lifeguards are on duty to keep an eye on the swimmers.

The Arizona Diamondbacks are using their large ballpark to make things more environmentally-friendly. You can find about 200 recycling bins on the premises, and staff uniforms use recycled materials.

All of the toilets are low flow, and the water faucets are more efficient than normal ones. You can also visit the APS Solar Pavilion for some shade and some exhibits on recycling and other sustainable living practices. 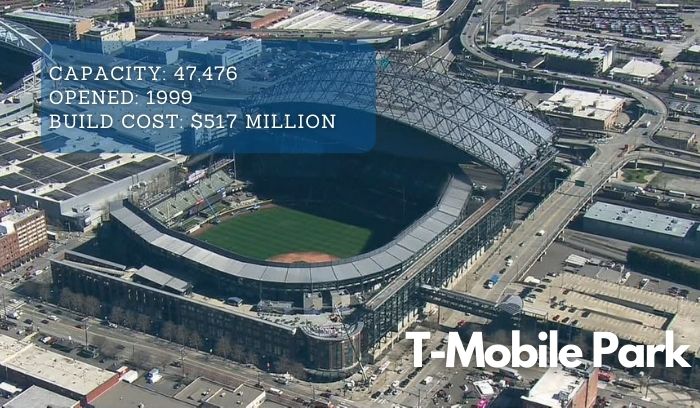 In Seattle, T-Mobile Park is another large stadium you’ll want to check out. With seating for up to 47,476 people, it’s one of the newest stadiums on our list, constructed back in 1999. You’ll marvel at its unique combination of both old and new architecture.

While people know Seattle for the rain, the city typically stays pretty dry during baseball season. However, T-Mobile Park has a retractable roof so that the team can practice or play at any time.

The stadium has a museum on the first floor that focuses on baseball, stadium, and team history. There are also art displays throughout T-Mobile Park. Spectators and visitors can enjoy the different areas of the park before or after a game.

Pick Up Some Gear

Don’t be afraid to show your love for the Mariners by stopping at any of the team stores located within the stadium. Each is open to the public all year, and you can find a variety of merchandise including memorabilia players used in a game, autographed items, and much more.

Military members get a discount when they show their ID. Additionally, anyone who purchases a ticket receives an in-store discount, too.

From the history museum to the retractable roof, you can enjoy a bit of everything about baseball in the heart of Seattle. 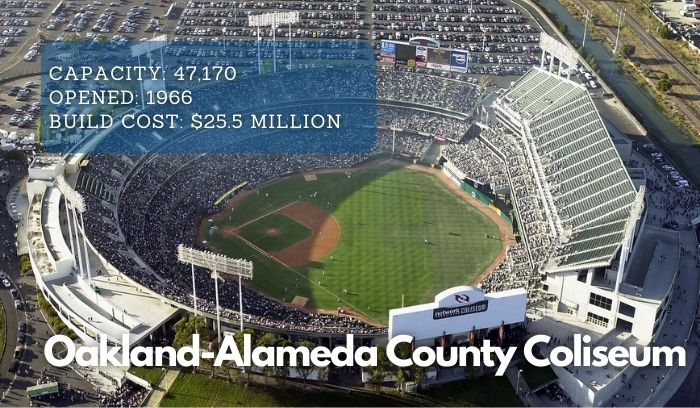 The Oakland Alameda County Coliseum isn’t just a large baseball stadium; it’s a football stadium, too! The seating capacity varies between 34,000 to 47,170 fans, depending on the location of the tarp on the upper deck. The stadium alternates between baseball and football each year, and switching the setup is a fairly elaborate venture.

It first opened in 1966, making it one of the oldest baseball stadiums in the country. While both Oakland teams have considered moving to other cities over the years, the city recently extended the A’s lease for ten years, ensuring the team will stick around for the immediate future.

The current location of the stadium is right by the San Leandro Bay, and it’s right off Interstate 880. It’s easy to access the stadium exit, so you can get to it from any part of the Bay Area.

To improve the stadium and keep teams in the city, Oakland has approved plans to build a new venture called Coliseum City. Aside from a new stadium, the area will also feature a variety of restaurants and activities. Unfortunately, that means the current stadium is scheduled for demolition.

When talking about baseball stadiums, bigger really is better. There’s nothing quite like the magic you can find inside these giant stadiums. Each features a wealth of entertainment and history far beyond the play on the field. Even better, you don’t have to be a baseball Super Fan to enjoy the experience found at these awesome venues.

So, grab your glove, put on your jersey, and get ready to root for your favorite team!