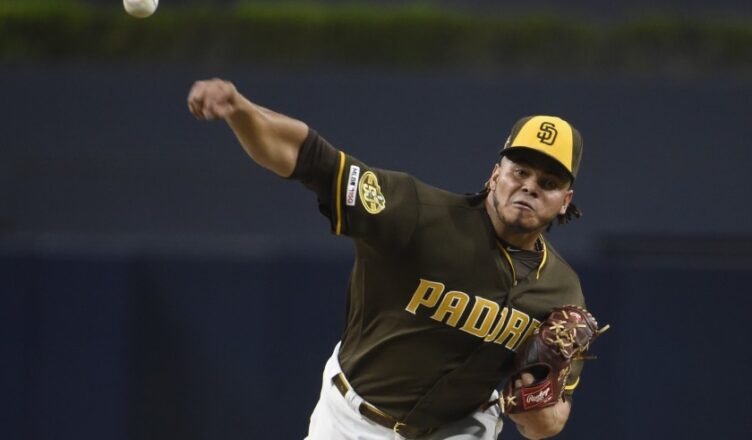 The Houston Asterisks certainly made headlines this off-season, but the team lost Justin Verlander for potentially the rest of the season, while popular summer sleeper Jose Urquidy has yet to surface. Fortunately for Houston, Valdez has been lights out in 2020. The southpaw has a remarkable 2.35 ERA to go along with a 1.10 WHIP and 40 strikeouts in 38.1 innings. Valdez has quickly become a reliable option in H-Town and will be worth streaming as a SP2/ SP3 moving forward.

After recording an ERA over 4.00 in the last four seasons in Baltimore, Bundy seems to have found in the groove in the City of Angels. The veteran is off to a 3-1 start to go along with 1.57 ERA and 0.63 WHIP. He isn’t exactly throwing heat with a 90.6 MPH fastball, but the veteran is mixing in a deceiving slider and changeup into his repertoire. Bundy has been an absolute steal this season!

Rosenthal was once one of the top closers in the game, as the fireballer racked up 93 saves combined in the 2014-15, but the veteran only amassed 25 saves over the past three seasons. Luckily, the right-hander has once again found his groove in KC. His seven saves have him tied for fourth this season to go along with a 1.46 ERA in 17 Ks in 12.1 innings. Rosey will continue to be an elite level closer for the remainder of the year.

Lamet missed most of the 2019 season due to injury. He finished with a 4.07 ERA and lackluster 1.25 WHIP. This season, though, the 28-year-old has been untouchable. He currently owns a 1.82 ERA, 0.84 WHIP and 87 K’s in 64.1 innings pitched. Lamet has quickly sky-rocketed into the top-15 arms in fantasy and will be a huge asset down the stretch this season.

After recording a glimmering 2.21 ERA with 221 K’s in 2018, Bauer took a serious step back in 2019 with 4.48 ERA. As a result, his A.D.P. stock plummeted this off-season. The 2020 season has been a huge rebound for the enigmatic hurler. He currently owns a 3-1 record with an 1.65 ERA and a sparkling 0.73 WHIP. His fastball is back in the mid-90’s and he continues to use a nasty slider/cutter combination more and more. Anyone who took a chance on the troubled veteran this summer, has to certainly be pleased this far through the 2020 season.