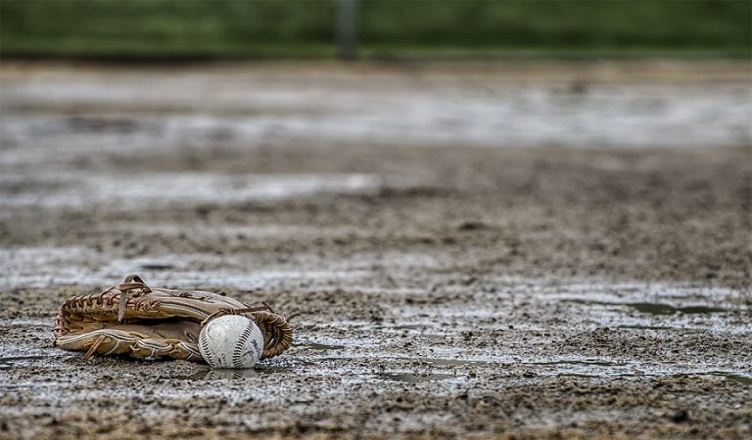 Read my article “Why Can’t Baseball Be Played In The Rain?” below for more information.

A baseball game has to be delayed whenever heavy rains are expected to instantly hit the area around the field in use. The field is covered with a unique trap that protects it from damages that might result from the rain. This condition where the baseball field is covered because of rain is called rainout.

A baseball game can however continue if the rain is moderate. This is highlighted in the Major League Baseball rules. The game continues as planned and can only be suspended in the middle if the rain comes in heavy. The suspension has no limit in time and may lead to the closure of that game. The chief umpire of an ongoing baseball game has the power to suspend it.

Baseball games are normally held during the summer and in cities with minimal rain expectations. Rain is uncontrollable and can easily interfere with a game. There are a number of reasons that makes it hard for the game to be played in rain. The reasons are as follows.

A baseball player can easily get hurt when playing under heavy showers. The field is wet and slippery. The player is also wet and has a bit less balance of his body. This means that the player can easily slide and fall. The fall can lead to an injury that could send the player to an early retirement. Every team wants to protect its players as much as it can.

Baseball players normally don’t wear extremely protective clothing. This leaves them susceptible to injuries especially when the weather condition is not favoring. The injuries may be caused by a fall, a collision or a hit by the ball.

2. The difficulty of running

Rain slows the players down. They will have to struggle so much so as to get to the ball. The baseball players’ shoes are not designed to have a perfect grip. This makes it hard for them to run and turn on a wet field.

Running in the wet field remains hard and even makes it harder for the players to instantly stop. An infielder has to slow down when he gets closer to the ball and this may be hard for him because of the slipperiness that comes with the wet field.

3. Handling the ball and the bat

Handling the ball becomes a problem when it is raining. The water makes it slippery. The pitchers are left struggling. It remains hard for them to make accurate and precise throws. The infielders also have to struggle so much before they catch the flying ball.

A wet ball also becomes heavy. Throwing and catching it therefore requires more effort. The ball as well rolls on the field with struggles. Its heaviness plus the water on the field forces it to stop before rolling far enough.

The batter is left having some hard time. The bat remains wet when rained on and easily slips off. Hitting the ball accurately therefore remains hard and the batter may bat poorly due to the rain.

Rain usually comes with wind, clouds and thunders. This comes in as a disadvantage to the baseball players. The wind can interfere with the flying ball and make it change its direction. A well-organized team can be left having a hard time due to this. The clouds may also be thick and dark. This will make it hard for the players to see the baseball as it is small and is normally sent with a high speed.

Thunders may also come with the rain and cause some tension to the players. Heavy thunders are always scary and can slow the players down. A thunderstorm can also hit a player and cause injuries or death.

The rain itself reduces the vision of the players. Picking an oncoming ball remains hard. The batter may get hit by the ball that can hardly be seen. A baseball is a bit small in size and therefore requires better vision. The combination of a heavy rain with wind, clouds and thunder makes a baseball game totally hard.

Rain normally makes it hard for the pitchers, infielders and the batter to play efficiently. The defending team remains more disadvantaged during the rains. This is because they are the ones that should majorly be having the ball as they try to score.

The rain may seize immediately the teams are about to shift their turns. The offenders will therefore have a better time defending. The defenders will remain disadvantaged as their opportunity of defending was harder compared to the one the offenders will be having.

6. The base paths and the mound

Sand gets highly affected by the rain more than grass. A baseball field is normally covered during heavy rains because it has the parts that are not covered with grass. The base paths and the mound are always filled with sand and can make the game harder when rained on.

The rained-on sand may turn into mud and cause a lot of slipperiness. Stickiness may also come and make it hard for the players to move around. The sandy baseball field parts are essential and should remain dry for all games.

Baseball is a game of speed and accuracy. Each weather condition normally affects it differently. Rain creates the most non-favoring playing conditions and should be avoided. Controlling the rain is impossible and that is why the game needs to be controlled. The players should be considered whenever the game is in play.

The coach of the hosting team has the power to delay a match that is about to be played under harsh weather conditions. His power to delay the match can only be exercised before the game commences. That is why every coach should always be considerate before allowing a baseball match to kick off.

How to Clean White Baseball Pants

How To Measure Hand Size For Baseball Gloves

How to Break In a Baseball Glove